Celebrating 100 Episodes of Jamstack Radio: Where Are They Now? Heavybit

A note from host Brian Douglas: In my second week employed at Netlify, I was approached by Heavybit to host a podcast on their network. Podcasting was familiar to me and I got my job at Netlify because of my podcast website I hosted on their platform.

I am happy I said yes, because little did I know that I would reach 100 episodes on talking with some of the most prominent founders, maintainers, and developers in the developer tools ecosystem. Some folks we chatted with were just getting started and are now part of large enterprise organizations. I am ecstatic by their success in the Jamstack and looking forward to sharing more conversations.

One of the first guests Brian had when the show first launched in 2016 was Airbnb Design Engineer Harrison Shoff. Back then, the engineering team was only 500 people (for context, now it’s well over 1,000). In 2012, Harrison helped build Airbnb’s style guides, which is how Brian found him, and those style guides are now regarded as the_ _standard for best practices and guidelines for generating quality code.

There’s not much to say about where Airbnb is now as it’s safe to say that we’re all quite familiar with how wildly successful the company is. In May 2020, Airbnb IPOed the same year that COVID19 kept everyone at home, yet it was the biggest IPO of 2020.

For newer listeners who haven’t caught up on all 100 episodes, when Brian first started the show and was still recording episodes at the Heavybit Clubhouse, guests would regularly bring jam (for obvious reasons). If you’re still working your way reverse chronological order to Episode 6, you’ll just have to wait to see what kind of jam Harrison brought to the studio. 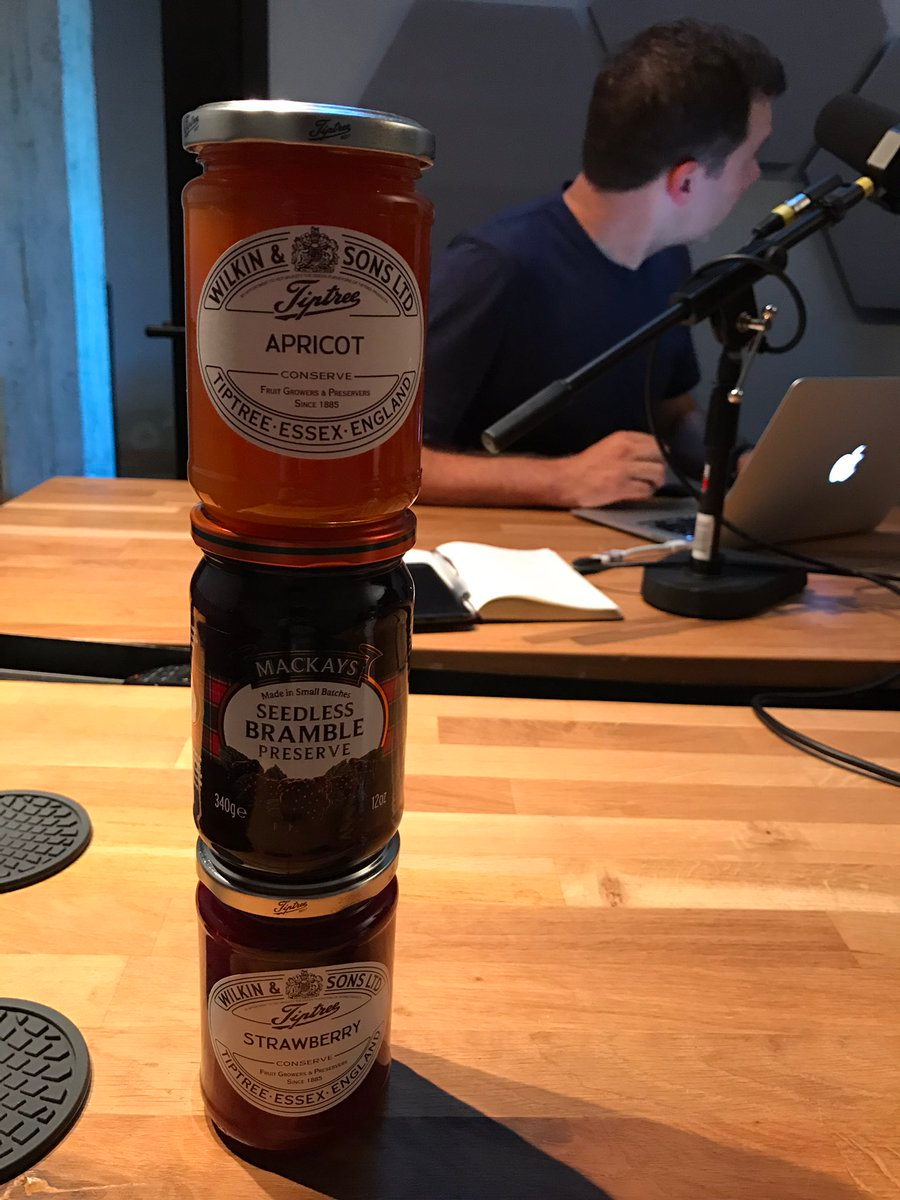 When Brian first had Johannes Schickling as a guest on the show, it had only been a year since Johannes sold his previous company and began working on GraphQL backend-as-a-service startup, Graphcool. At the time of recording, they were a team of 5 and had 1,000 customers.

Not even a year later, Brian has Johannes and his Co-Founder Soren Bramer Schmidt on the show again as a lot has changed for the company and in the space. Graphcool was now managing the largest GraphQL Slack community of over 6,000 members and slowly shifting to an open sourced backend development framework.

Brian: You were pretty early-on on the whole bandwagon of starting a company around the idea of GraphQL. I thought that was way interesting.

Johannes: The last time we spoke, GraphQL was fairly new, we were spending most of our time explaining to people what GraphQL is. Now GraphQL has become really mainstream.

In July 2020, after more than 4 years of serving 234k projects and 59k users, Graphcool pivoted to Prisma, an open-source ORM for Node.js and TypeScript that’s now serving over 100k users, and Johannes is working on building his newest project Contentlayer.

After repeatedly coming up in conversations with previous guests, Contentful was asked to be on the show before it even officially joined the Heavybit portfolio in August 2017. Contentful was founded in 2013 out of dissatisfaction with the existing web-focused CMSes and by 2017, it had an ever growing team of over 100 people from 37 nations.

Over the years, Contentful’s made a name for itself as a category leader in the headless CMS space, being used by leading companies like Staples, Atlassian, Electronic Arts, Chanel, Vodafone, and more than 30% of the Fortune 500.

Coincidentally, Brian’s second episode with guests from Contentful aired the same month that they announced reaching unicorn status, so be sure to check out both episodes to hear about that 4 year journey. 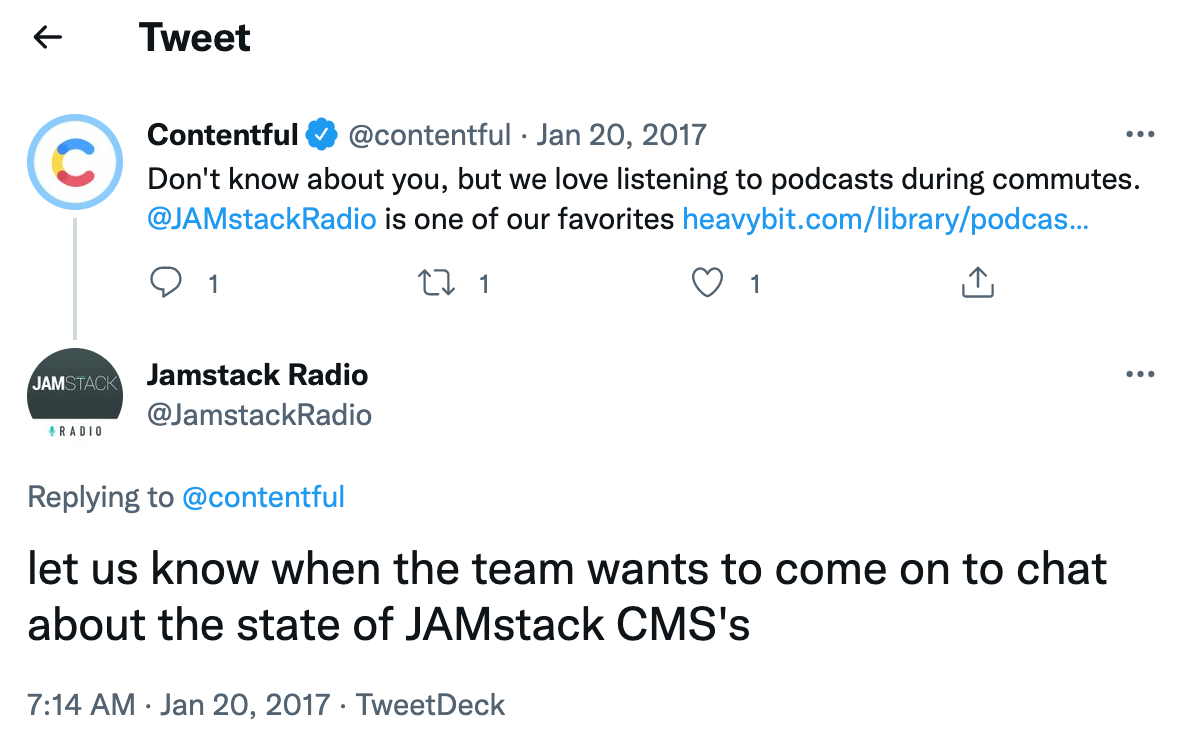 Back in 2017, Brian reached out to Jacob Schatz, who joined GitLab in 2015 as its 29th employee and first frontend developer. “DevOps darling” GitLab made headlines for its IPO just this past year and has emerged as the leader of remote-first workplaces; in other words, there’s no one in the devtools world who hasn’t heard of GitLab at this point.

Funnily, Brian had said: “I've been hearing about GitLab for a while. I have a GitLab account, I have one project on there. And it was always mentioned as the other thing that you can host your code on. But only within the last year I've actually used it on a regular basis and taken it seriously.”

GatsbyJS was born in May 2015 as a simple way to build a website or an app with React. In early 2018, GatsbyJS core contributors, including creator & lead maintainer Kyle Mathews, formed Gatsby Inc to help website development teams build CMS-powered websites and apps with modern tooling.

Just a couple months before the announcement, Brian sat down with Kyle to discuss how the open source project got its beginning and Kyle’s experience building startups. Since then, tens of thousands of developers have begun using Gatsby to build apps and websites from blogs and portfolio pages to company homepages and e-commerce applications. 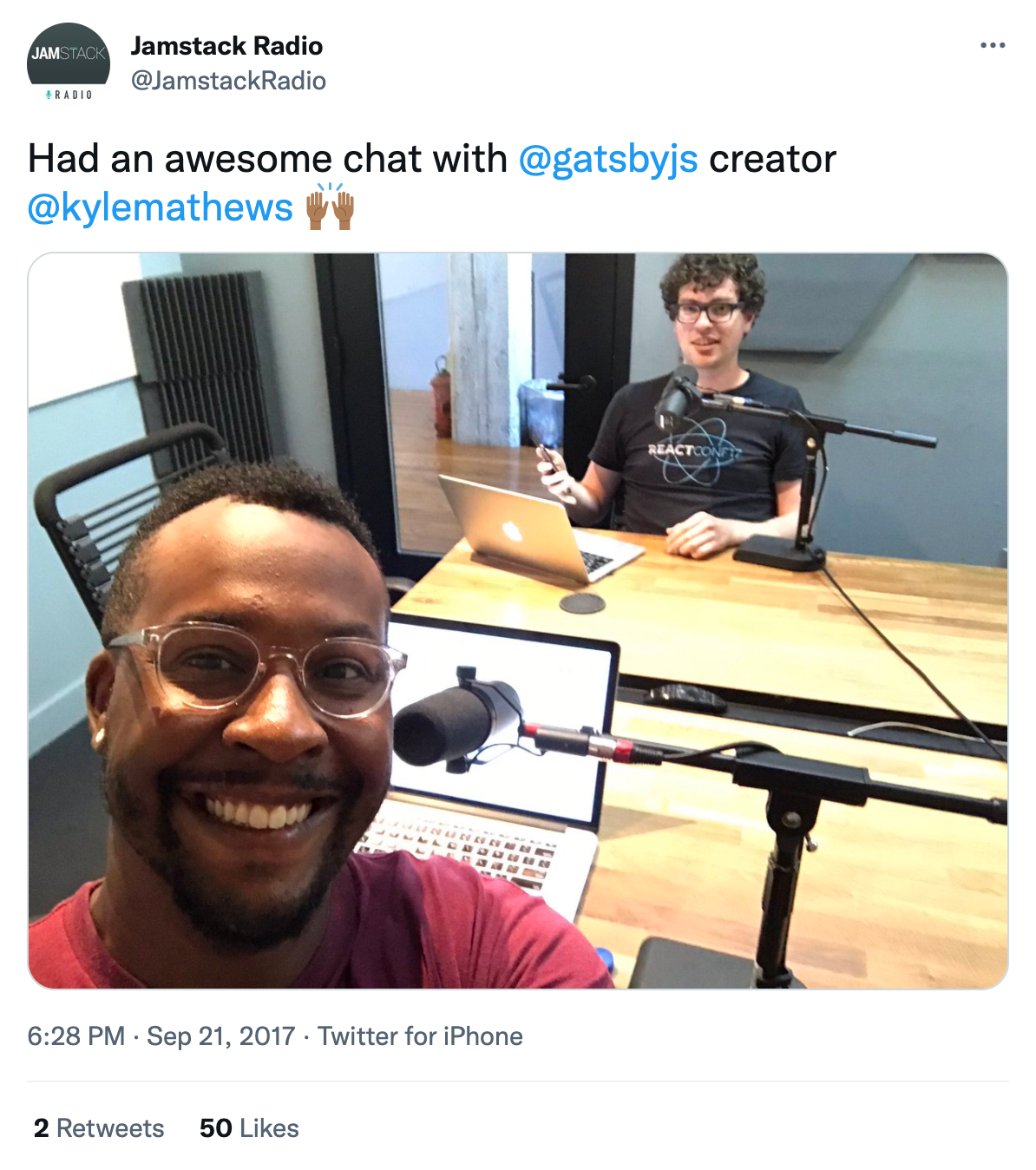 A big thank you to host Brian and all of the guests who’ve kept the show running strong for 6 years. Here’s to another 100 episodes! Be sure to subscribe to JAMstack Radio wherever you get your podcasts and reach out on Twitter @JamstackRadio if you’re interested in being on the show.