The Challenge of Building Marketplaces for Developers

On March 31, 2021, Stack Overflow went viral for an April Fool’s day prank that was as funny as it was resonant: The Key–“a device built from the ground up to make copy-pasting code from Stack Overflow fast, painless, and fun.

Three years prior, the founder of Compassionate Coding, April Wensel, went viral with something very different: a Medium article titled Suffering on Stack Overflow, which expanded on a Tweet that accused Stack Overflow of being “toxic” and “inhumane”––a “wasteland.” 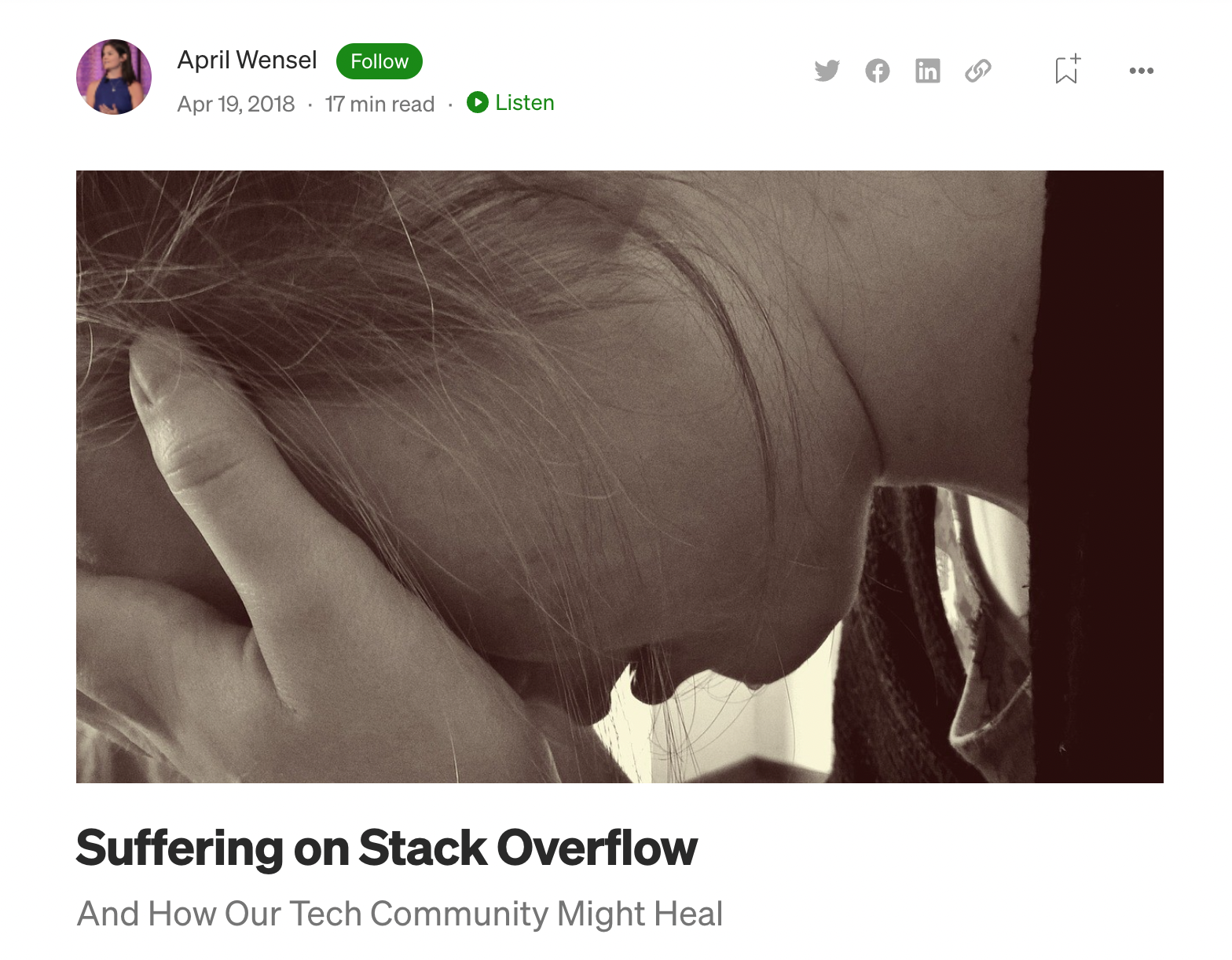 While Wensel has backed off a bit from her initial stance, both events went viral because they each speak some truth:

This dichotomy illustrates the power and challenge of network effects.

In this article, we’ll explore network effects–specifically, network effects for developer marketplaces. By the end, you’ll understand why so few developer-focused network businesses have succeeded, and if you’re interested in incorporating network effects into your business, you’ll have a better idea how to make them work.

What are Network Effects?

Network effects account for 70% of the value creation in the technology industry between 1994 and 2017. Google, Microsoft, Facebook, Airbnb, Uber, Spotify–all these companies owe much of their success to network effects.

Network effects invite definition but resist explanation. The definition is simple: Network effects are when a business’s offering grows in value as it adds more users, meaning there is a positive and potentially exponential growth curve wherein companies add users, the offering gets better, and the company has an easier time adding users because the value of the offering keeps increasing. Over time, the growth and improvements lead to the classic hockey stick growth graph that every startup wants.

Stack Overflow, for instance, has aspects of a social network. It connects users from across the world, offers them profiles, and ostensibly helps them look good to employers. In other ways, it looks like early consumer internet businesses like Answers.com or Yahoo! Answers, where users generate content and the site monetizes pageviews with ads. In contrast, Reddit, the “front page of the internet,” began as a community-focused operation reminiscent of bulletin-board style forums, while Facebook infamously started as a local campus project.

Founders looking to create a company that uses network effects have to balance between pattern-matching and pattern-breaking: learn from other networks but take a creative approach to your implementation.

So let’s talk about the challenges that marketplaces and social networks in this space face.

The cold start problem, also known as the chicken or egg problem, refers to the difficulty of starting a network effect.

Facebook, for instance, after critical mass, is an easy sell for new users: All your family is on there! Connect, share, and enjoy!

But before critical mass, the pitch is difficult. If a new user’s family and friends aren’t on Facebook, why waste time on it? An empty network is frustrating and valueless.

If you’re building a network for software developers, kickstarting such efforts might be especially difficult. Jack Bridger, host of the Scaling DevTools Podcast, argues that developers, by trade, have to be "higher-order thinkers,” meaning they’re less likely to be compelled by giveaways, vouchers, or deceptive marketing tactics.

A would-be competitor would have to do what Stack Overflow itself did and satisfy, in Bridger’s words, “higher-order desires.” For Stack Overflow, that involved convincing developers they were contributing to what co-founder Joel Spolsky called “the programming equivalent to the Library of Congress.”

Any network business focused on developers has to conquer the cold start problem in an especially skeptical niche. You must cultivate a broad spectrum of users while ensuring both lurkers and power users are happy.

Dev Community is a good example of a business doing this today. Initially, the site was essentially a developer-friendly alternative to Medium, but it’s evolved as the community around it has. It now offers forums, job listings, a conference, swag, and more. Writing content there is now arguably more valuable than writing on one’s personal blog because there’s a built-in audience already.

At some point, Facebook stopped hustling for college users and Reddit employees stopped faking posts. This “tipping point” happens when network effects take off and create the hockey stick graph founders dream of. The problem is that network effects only take you so far and if you’re not a good steward, they can unwind.

Investor Andrew Chen has written an entire book about network effects, and in it, he compares network effects to meerkat population growth. If a population of meerkats isn’t big enough to warn of incoming predators, then predators will pick them off one by one, and the incentive to join this population will deteriorate as fewer meerkats exist to warn others.

Networks are similar: If users download a new social network but find none of their friends are there, they might delete the app, which leads to a similar deterioration and evaporation. This dynamic, according to Chen, is what happened to MySpace.

If you assume the meerkat population clears the first threshold though, they will likely hit another problem: carrying capacity. There are limited resources and growth will eventually plateau as scarcity dominates.

Networks, again, are similar: If a communication app gets too many users all at once, users might have to fight to see the signal through the noise.

Consider eBay, which was successful in the United States but launched in China and failed to capture the market Alibaba eventually captured instead. The CEO of eBay China blamed a lack of trust among consumers because Chinese consumers weren’t accustomed to using Paypal, or a tool like it, to process payments. When eBay failed to build the consumer side, the benefits of remaining in that network collapsed and Alibaba had a chance to take over.

Many businesses deliver value that scales linearly with revenue (“charge more” aside). For example, most SaaS businesses will increase revenue as they acquire more customers and deliver more value to users.

A business using network effects, however, can scale massively in value and yet fail to capture much, if any, of that value in terms of revenue.

Any founder looking to build network effects needs to be wary of this experience. It’s completely possible to build a wonderful marketplace that provides very little revenue along the way.

For example, the founders of Reddit previously sold the website in 2010 to Conde Nast for $10 million despite its “recent multibillion-dollar valuation.” In contrast, Facebook has seen significant growth and profitability in its lifetime, but it has also seen more than its share of controversies, including run-ins with Congress, and since shifting its focus to the “metaverse,” the company has seen significant losses.

Even Stack Overflow has arguably created more value than it captures. In 2013, John Carmack, Oculus VR CTO, tweeted that Stack Overflow “has probably added billions of dollars of value to the world in increased programmer productivity.” Eight years later, Stack Overflow sold to Prosus for "only" $1.8 billion.

Stack Overflow monetized early on with a job board and it now sells a B2B version of its Q&A software. Bridger notes that Stack Overflow “famously unseated Experts Exchange, which was at the time charging about $250 per year to see answers on programming questions.” It also helped, Bridger said, that the job board “was an additional feature rather than the reason developers came.”

The challenge is building a pathway toward monetization that doesn’t degrade the network effects the business relies on.

Depending on the situation, defensibility can apply to big and small networks alike. For example, Snapchat had a thriving format in Snapchat Stories but lost momentum to Instagram, which copied the Stories format and added 400 million daily users since the move.

The problem is that social networks, by nature, compete with other social networks, meaning that a powerful network effect from another company can siphon users away as rapidly as you acquired them.

Marketplaces have an advantage, though. Since they’re harder to build, they’re also harder to unseat. A competitor to a successful marketplace has to create an experience that’s better for both customers and vendors to siphon off either type of user.

Social networks and marketplaces are both subject to competition via multi-tenanting, which is when a user uses multiple platforms. For example, software developers who want to write can easily use a tool like CrossPost to push the same blog post to Hashnode, Medium, Dev.to, and their personal blog.

For knowledge marketplaces like Stack Overflow, users can ask and answer questions on Stack Overflow, Reddit, and Quora. Though Stack Overflow is undoubtedly the leader in this niche, this dynamic means multiple platforms can continue to nip at its heels. Meanwhile, switching costs remain low. If users either find it worthwhile to switch, previously powerful network effects can unwind and competing companies can rapidly acquire departing users.

At a large enough scale, the reputation of a network precedes itself, for good or for bad. Network effects, which might draw new users in while an application’s reputation is positive, can start to push new users away if the network’s reputation worsens.

Reputations typically change because of pollution. Pollution becomes a problem when a significant number of users change the experience of the social network in a way that doesn’t benefit the majority of users. D'Arcy Coolican and Li Jin categorize this differentiation into three buckets: contaminants, neutrals, and contributors:

For a social network, adding a troll that disengages other users is a pollutant who removes value. Adding a lurker is neutral since that person doesn’t add or subtract any value from the network. Adding a great content producer contributes an enormous amount of value to the network.

Consider a few examples of reputational issues and the approaches that different organizations have taken in response. For example, Reddit, perhaps as a consequence of its extremely broad community, has a history of controversies that run the gamut from celebrity privacy hacks to politics. Facebook’s controversies are also well-known, including an infamous 2004 study linking social media addiction to potential psychological harm and a variety of issues pertaining to user privacy. Stack Overflow’s reputation and pollution problems stretch back years, with some users refusing to use the website in response. In a 2018 retrospective, founder Joel Spolsky acknowledged that the site can be “disproportionately off-putting to programmers from underrepresented groups” and that “we’ve also heard from too many who were apprehensive about participating.” While Stack Overflow has made some progress and it doesn’t seem to be hurting the site’s popularity or impact, it does show how difficult it is to stay on top in a marketplace business.

While the bulk of this article has been about the challenges of building and maintaining a network, marketplaces do still have a place in the developer ecosystem. There seems to be a rise in marketplaces devoted to producing and promoting technical content, like Dev.to, Hashnode, and HackerNoon. There are also a plethora of talent marketplaces like Toptal, Arc.dev, and Turing, and several educational marketplaces targeting devs.

Technology Marketing vs. Product Marketing: Which Is Right for You?