The Realities of Docker in Production

Light Mode
What it’s All About
But the puzzle pieces don’t quite fit…
Accomplishments with Docker
Limitations with Docker
Keeping an Eye on the Docker Roadmap
Conclusion
MAR 31, 20158 min

Docker seems like a fundamentally better abstraction for packaging and deploying applications in a persistent way across multiple environments. Among individual developers and ops engineers it’s praised, but at a recent Docker in Production meetup held at Heavybit, engineers from Iron.io, ClusterHQ, RelateIQ and Docker discussed the realities of running Docker in Production — namely what does and doesn’t work.

What it’s All About

Docker’s roots are in the development world, where developers tend to run applications on a single machine. But the truth is that real apps run on more than one computer. Making this leap with Docker means paying attention to how you compose your production systems. According to event host Luke Marsden of ClusterHQ, there are four categories of obstacles you need to address when scaling from a single-host environment to multi-host environments:

But the puzzle pieces don’t quite fit…

While there are more than a few tools that have worked to flesh out the Docker ecosystem and make these central principles achievable, there is still a core issue: it’s not currently possible to compose all these different pieces together. The current shape of Docker systems look something like this: 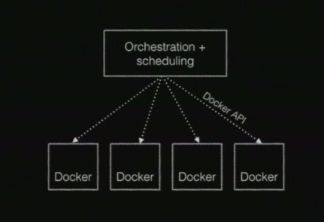 In this current model, there’s an orchestration component (Mesosphere, Swarm) using the Docker remote API to talk to Docker hosts, but networking and storage extensions have a big issue—they’d need to take on the role of orchestration as well. And it’s a pretty straightforward issue beyond that: wrapping sucks. Tools like Flocker and Weave have to have their own user experiences and command lines to meet their needs.

Marsden also spoke about how there needs to be a plugin mechanism in the Docker remote API that sits on top of Docker, and allows network and storage plugins to peacefully coexist. He says there are three things required to make this solution viable: these extensions need to be late-bound, composable, and optional. He suggests ClusterHQ’s Powerstrip as a composable adapter that meets these criteria. Powerstrip is a Docker API proxy that has multiple blocking pre-and-post hooks on arbitrary Docker API calls. This allows a Powerstrip proxy to load two Docker extensions side-by-side.

A separately echoed concern, from RelateIQ and Docker, has been that production environments shouldn’t include containerized persistent data stores.

This was mentioned earlier in the context of the “pets vs. cattle” metaphor. Docker says this is an example of something where they don’t want to do everything—they want to let the Docker ecosystem and community step in when they can do a better job. Though, in this particular instance, persistent data storage is something Docker would like to internalize in the future.

At the event, Iron.io was quick to point out some of the benefits they’ve seen from implementing Docker in production. The company provides an event-driven compute service that uses Docker to provide flexible environments to use almost any language and version to perform on-demand async workload processing. These benefits have also been echoed by others including those who’ve gone on record as official Docker use cases. Iron.io’s list of positives included:

At the same time, Iron.io also documented some of their difficulties with Docker. Nevertheless, their pain points haven’t stopped them from using Docker in production at high scale – the company has run over 500M Docker containers since adopting it over year ago. Additionally, many of the difficulties with Docker are quickly becoming outdated by the rapid growth and stabilization of Docker updates. Currently, Iron.io’s pain points with Docker include:

And while they had other pain points documented, such as long deletion times and volumes not unmounting, they quickly overcame those production obstacles. The general impression is that Docker’s feasibility in production grows stronger with every stable release, and the problems are generally outnumbered by the positive attributes.

Keeping an Eye on the Docker Roadmap

Looking at the Docker roadmap can help us get a better understanding of what issues Docker has identified and is looking to implement. Docker has always taken the stance that it doesn’t need to be everything — that it should allow a Docker ecosystem with solutions to flourish around it. You know when they start talking about new features, they’re very serious about them.

Docker’s Jérôme Petazzoni had a few words on the status of several high-profile Docker projects. Docker has always been up front about the uncertainty involved in some of these components; for example, even the documentation on Swarm and Machine warns that “[Docker] doesn’t recommend using [them] in production yet.” Of the projects, Compose is the most mature, and it rounds out the three projects in Docker’s aim to create a comprehensive set of orchestration services.

In addition to the above examples, we’ve heard about others using Docker in production, including New Relic and Spotify. Nevertheless, a great in-production experience is always a question of scalability and reliability between different teams and systems. The general impression is that, while there’s a lot you can do with Docker, there’s still plenty to be done.