This month Heavybit held its first DevGuild – an event that brought together 209 developer evangelists and community advocates to discuss the philosophies and tactics necessary to rally contributors and communities.

Our committee of organizers had a hunch that evangelists would be a talkative bunch, but in addition to the thoughtful onsite discussions, attendees shared 620+ event-related updates reaching an online audience of more than 60,000 people. In addition to checking out our 5 Ignite presentations, attendees also shared updates about some of the thought leaders in the room. The unconference format of this event meant that the discussions onsite and via social media were extremely engaging for all those interested in the space.

Here’s a recap of the day incorporating some of the best comments and photos from attendees.

The Day in Pictures & Tweets

In addition to capturing the conversation online, Heavybit members Spark and Keen IO also captured the foot traffic of the event itself by placing lazer sensors throughout the space.

Keen IO’s Josh Dzielak acted as the day’s emcee, offering background on why we think Developer Evangelism is crucial to building communities and companies.

Room full of social geeks at HeavyBit #DevGuild event. Want to grow your API? You need these folks! pic.twitter.com/TDxwFe1Nt3

Shortly after, Iron.io’s Developer Evangelist Stephen Nguyen got everyone out of their seats with an icebreaker activity. DevGuild topic keeper and Runscope Dev Evangelist Neil Mansilla snapped a shot of the icebreaker as it was happening. 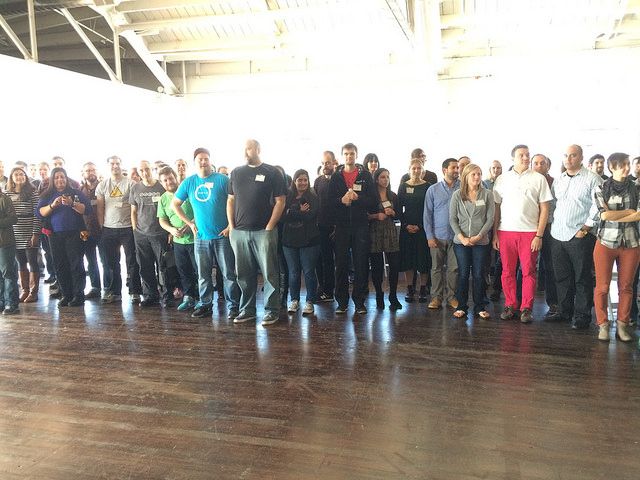 Attendees then used stickers to vote on their favorite topics and Mansilla organized the board and tallied the votes.

DevGuild attendees then broke into unconference groups to discuss topics like Content Strategy, Internal Evangelism, Measuring Success and Hackathons. A complete list of final topics is available on the Wiki.

Unconference session on hackathons being facilitated by @mager #DevGuild pic.twitter.com/CZ4MUpJGEH

Just happened to bump in to my Java #thinkinginjava hero @BruceEckel at #DevGuild in San Francisco- how cool is that? pic.twitter.com/9zYUyQY2ML

As part of our commitment to communities (both on and offline) we ended the day on a high note with happy hour drinks and announcing that we’d raised $2735 from our ticket proceeds for Canon Kip Center. The organization offers housing and meal services to homeless Seniors just two blocks from the DevGuild venue in SF.

Thanks to @heavybit for hosting amazing Dev Evangelism event #DevGuild Such a tiny awesome world 😺 pic.twitter.com/7KLZ8ZseT4

As next steps to the inaugural DevGuild unconference, we want to thank everyone who helped make this event possible including the committee, speakers and attendees who ensured there was no shortage of inspiring discussion and interesting debate. This event was created to start a larger conversation around developer evangelism and as next steps, here are a couple ways you can plug into the community:

Again thanks to all those who attended and made this event possible. We look forward to expanding DevGuild with you in the near future.

More from the libraryVisit Library