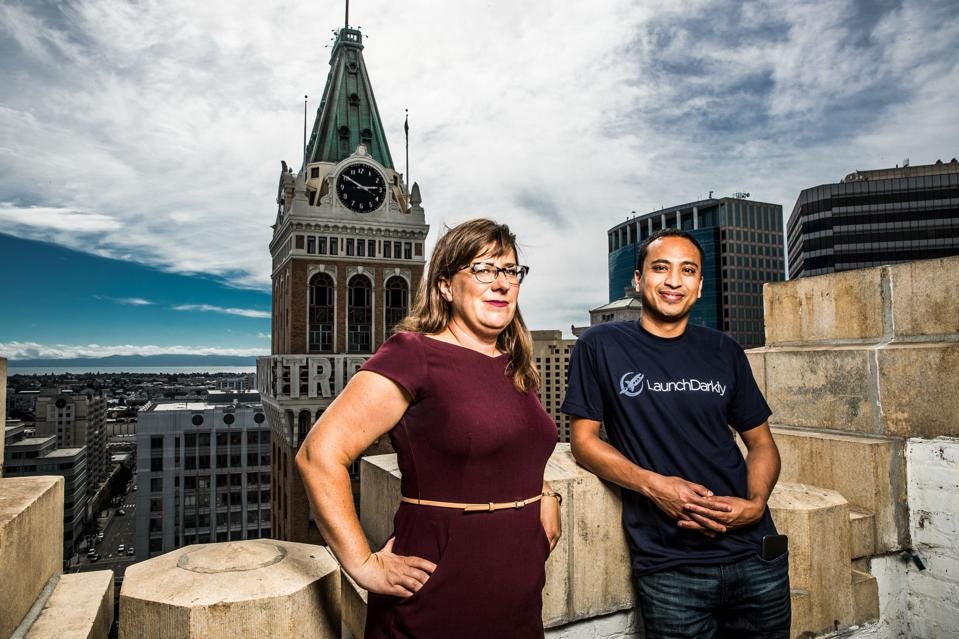 Before LaunchDarkly, Edith Harbaugh managed product at Tripit, PlantSense, and Monster. Prior to that, she was an Engineering Manager at Vignette and Epicentric, with patents on deployment. Her LaunchDarkly cofounder John Kodumal spent years managing engineering and software development at Atlassian and for the Atlassian Marketplace. Throughout their careers, the two Harvey Mudd College alumni saw a shift from companies deploying multi-year releases to continuous delivery releases (multiple times a day).

As was the trend with other tech companies like Google, Facebook and Twitter, their respective companies had built custom feature flagging infrastructure in-house. Edith and John realized the opportunity to provide this same granular control as a cloud service, and in 2014, started LaunchDarkly, a feature management platform that helps companies like Microsoft, SAP and InVision eliminate risk from the software development and release cycle.

Today, the company is on Forbes’ Cloud 100 list, the Enterprise Tech 30 list and serves over six trillion feature flags each day, on fourteen million mobile devices, and three million servers. The platform is now serving more flag evaluations each day than there are Google searches in a year.

Mentorship: A Network of Specialized Makers

Says Harbaugh, “If you’re looking for advice while running an early-stage startup, you generally need more than a single advisor. The ideal is having a network of people with relevant domain expertise and current knowledge of how the industry works. This is tough because the industry for developer companies changes very quickly.”

The advisors at Heavybit were amazing for perspective and encouragement.

“In fact, we ended up getting help with things we didn’t even know we needed help with. I thought we were going to be a bottom-up sale. Turns out, we’re much more of a fit to enterprise sales. Heavybit also had advisors who could help specifically with that.”

Some advisors that helped LaunchDarkly think through product-market fit include Harrison Metal’s Michael Dearing, who advised on funnel management, Acompli’s Javier Soltero of who helps refine LaunchDarkly’s go-to-market strategy, and StackOverflow and Discourse’s Jeff Atwood on effective business models. Harbaugh herself is now a mentor to other founders in the Heavybit community and continues to share some of the lessons she’s learned to date.

Community: The Right Community to Start Their Journey

Developer tool companies have a unique and tough path to market. It’s really nice to have access to founders that are facing your same challenges, and who you can ask for advice and then help others in return.

Harbaugh and the LaunchDarkly team got a chance to work alongside fellow developer companies like OverOps, RainforestQA, and Apiary. One community member, Heavybit advisor and former Heroku CEO, Oren Teich, happened to sit near Edith and offered her regular advice during her tenure in the Heavybit clubhouse.

Says Harbaugh, “While designing our early pricing model, Oren encouraged us to charge more. He warned me that most technical founders charged too little, and challenged me to charge more if I was proud of our product and the value we offer.”

“One thing people might not know about Heavybit is that they help establish visibility and public awareness with the right developer audiences”, says Harbaugh.

From practicing my public speaking, to getting articles published, to starting a podcast; Heavybit gave me a platform and the confidence to do it.

“For example, they made the podcast painless, they built state of the art studios and offered a post production team to manage everything for us. I just had to show-up.”

Edith knew as the company’s CEO that it was up to her to create more visibility for her product and team. Throughout the accelerator, she took every opportunity she was offered to increase visibility and receive feedback — presenting on Heavybit’s stage, guest writing and publishing to major technology press outlets, and cohosting different events and podcasts.

To date she cohosts one of the network’s most popular podcasts To Be Continuous, has spoken on stage at Collision, Microsoft Build and WebSummit, and is a regularly featured in TechCrunch and Forbes.

Heavybit has a great reputation. Our acceptance into the program automatically put us on investors’ radars. But it’s their help with visibility and fundraising, that also helped us raise our Series A.