When Will I Start to See Traffic? A Field Guide for Managing Expectations in Content Marketing Erik Dietrich

Erik Dietrich is a longtime software engineer and software blogger, who eventually combined those pursuits to start a business. His company, Hit Subscribe, matches devtools companies needing content with engineers that want to write about tech.

In this post, Erik sets expectations around rank and traffic based on his and clients’ experiences, and outlines the timeline for when new sites can start to see ROI.

They can talk a big game about using past outage data to project future uptime or using performance metrics to inform user experience. But ask them how long it’ll take to complete their current feature, and they’ll probably think up some number of weeks, pad it a bit, then double it, just to be safe. Under-promise and over-deliver, as they say.

I know this because I spent almost two decades building software and managing dev teams, before improbably, stumbling into being a marketer and running Hit Subscribe, a content marketing business. (That’s a story for another time.) Nothing disorients a software engineer like the dreaded, “when can you have that done?” ballpark question. The caveats, qualifications, and “it depends”es will start immediately.

There’s a definite irony to technical founders or engineering teams turning this question around on marketers. “Alright, so how many days before I start to see a return on these blog posts you’re creating?”

I kid, but only kind of. Your average executive, inexperienced with content marketing and the organic search channel, tends to reason about bringing in search engine traffic the same way they would reason about paid advertising. You turn it on, start measuring, and pretty soon, the content will bring you new business that should pay back what you spent and then some.

Well, if that’s your expectation or your boss’s, brace yourself. The reality is nowhere close to that, especially for relatively new sites.

Bringing traffic in through your brand new blog is a long game. Generating qualified leads, trials, and purchases is an even longer one.

But it will pay off, I promise.

As I mentioned, I spent years and years writing software and saying, “it depends” when asked for estimates. I also spent years as an IT management consultant, a role that cynics out there probably assume means collecting people’s money to tell them that “it depends.” But I’m going to subvert expectations here. I’m not going to tell you that your time to rank depends on a variety of factors, though that’s obviously true.

Instead I’ll be very clear. It’ll take your articles about six months to rank on your new blog, assuming you do a good job planning them. You might find yourself pleasantly surprised before then, but six months is a good inflection point to reconsider your strategy if you’re not yet seeing results.

Now, this doesn’t mean you need to double check your hosting after six months to make sure it covers your hundreds of thousands of visitors. You will indeed have ranking articles at this point, but they’ll rank for low-competition, low-volume search terms known as “long tail” keywords. So that initial traffic will be something of a trickle.

Once that trickle starts, it will grow with time. In fact, assuming you’re posting about once per week, you should start to see regular traffic growth around the six-month mark, building to some hockey-sticking around a year into things.

If you really want to do some expectation-setting around organic content, think six months for rankings and a year for significant traffic. It’s because of this that I generally ask prospective clients of Hit Subscribe whether they view their investment in content as a multi-year effort. It’s important to set the expectations around the scope and scale of bringing organic traffic to the site, before starting.

You might find yourself wondering why I’m tossing timelines around so confidently. Well, part of it comes from having worked with a lot of clients, planning and creating content for them, and measuring their rankings and analytics. But part of it comes from an honest-to-goodness, full-blown content experiment.

It was the summer of 2018, and I found myself wanting to prove a point. In talking with a client, we were both looking at measurable progress on the organic traffic front, in rankings, and in general.

Philosophically, he mused that it was hard to know exactly what contributed to this. Sure, our content planning and creation obviously played a role. But what about the slick new theme that he’d installed, social media promotion, or some direct outreach campaigns he was doing? All valid questions, and the world of trying to guess what Google likes can be a murky one.

So I had an idea for an experiment.

I decided to control all of the variables that he’d mentioned and any others that I could think of. I bought a domain name and hosting, and I created a WordPress site, from soup to nuts, in about 20 minutes. Doing this allowed me to control the following variables:

With all of those things controlled, what was the variable? Just applying Hit Subscribe’s content planning and creation process to the site. That was it.

So, what were the results? Well, I go into more detail in this video, but this picture does a pretty good job standing in for a thousand words:

We pushed the first article live in August of 2018. The rest of that fall, we published another 10 articles or so, and we only ever wound up doing a grand total of 13 over the course of the site’s first year of existence. The traffic you’re seeing here isn’t the weekly cadence that I mentioned earlier, but rather a front-loaded monthly cadence.

As you can see, it was basically crickets for the first five months, with a bit of a blip in February, month six. After that, you start to see the blade of a nice hockey stick.

To be clear, this was a brand new site that I built in 20 minutes and gave no advantages to out of the gate whatsoever. So if that site can start to rank after six months and realize hockey-stick growth within a year, your site can definitely do the same (assuming you’re not doing anything SEO-wise to actively hurt yourself).

Variables That Affect Your Time To Rank

Now, I understand that your site isn’t makemeaprogrammer.com. Your company has probably put at least a little thought into your theme, and the site has probably existed long enough to earn a little credibility in the search engines’ eyes.

So how do you tune your expectations accordingly? What might impact your time to rank right out of the gate, either negatively or positively? Well, let’s take a look at some key factors.

This might seem like a lot of variability, but it really all comes together for a fairly simple plan. Create a site that’s basically performant and doesn’t have SEO setup deficiencies, find keywords (questions) with low competition, and make sure to nail the search intent of the keywords you target.

If you do all of those things, six months will be the upper bound on your time to rank, and it may wind up being a lot less if you already have good domain authority.

Measuring Progress Along the Way

If you look at the screenshot I posted, you might reasonably think “that seems great, but you were taking the time between August and February in faith.” In other words, six months is a long time to wait for feedback if you’re putting a post per week on the blog.

The good news is that you don’t have to wait that long to see progress. You can actually start measuring things much earlier than that. Here’s a list of things that we look for with content, even before you start to see visitors in analytics. 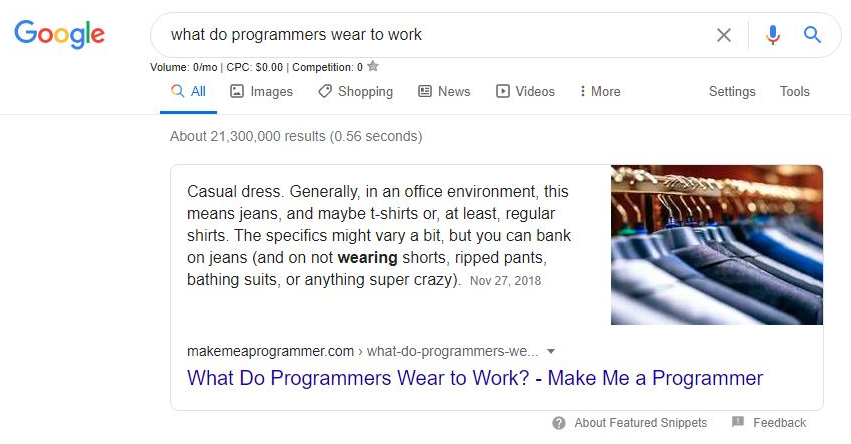 It’s a Long Game and a Numbers Game

As you evaluate your posts, this timeline will prove very helpful. It lets you adjust and course correct much sooner than at the six-month mark.

But keep something in mind as you do this. What I’ve laid out here isn’t a way to ensure that every post you write ranks and brings traffic. Nothing can actually do that.

When it comes to building organic traffic, each article isn’t a project—the blog is. Some of your posts will rank and drive tons of traffic. Others will be sort of middling, and still others will just never rank at all for whatever reason.

A good approach and content plan won’t make everything a home run. But what it will do is make ranking and traffic the norm for posts with the occasional dud in the mix, as opposed to what happens with most sites: many organic duds for every one that randomly brings unplanned search traffic.

Bear in mind that it takes a while and that it’s a numbers game. The fact that you can’t tell the boss when any one post will rank for any one keyword shouldn’t stop you from creating an accurate and predictable holistic approach.

So next time someone asks you how long it’ll take for you to rank, you can confidently tell them, “that’s not strictly knowable, but I know of a pretty convincing case study that suggests we can plan on about six months.”

New to content marketing and interested in learning more about how to get started? Check out Hit Subscribe, connect with Erik, and discover content-related resources in the Heavybit Library.