Deciding How and Where to Reach Developers

Year over year, the size of one’s tech stack increases; It’s said that enterprises use over a thousand developer applications in their tool chain. You need to capture the attention of developers and stand out from the competition. Rather than just waiting for potential customers to find you, in this post Alexes Mes, Associate and Data Scientist at SlashData shows you how to become top-of-mind for developers.

In order to design effective outreach campaigns that engage developers, it is crucial to know where they go to find information and how they stay up to date. Let’s look at which channels are the best investments of your time and resources to reach your developer audience.

What channels can I use to effectively reach developers?

Part of the developers’ responsibilities is to stay up to date with the ever-changing landscape of technology. Many engage with peers in their community while looking for help to address coding issues; others rely on official vendor communication channels and conferences.

There are many channels developers use to consume information and connect to their network. Ever wondered how you make sure your product is front and centre in their search? Here, we look at understanding the common sources developers are using to stay up to date and how the importance of information sources shifts across software sectors.

Open source communities are the most popular source for developers looking for the latest in software development, with almost half (48%) of the global developer population using these communities.

That being said, the top five most popular information sources are used at nearly the same rate. With only four percentage points between the top and fifth most popular sources, it’s clear that using a combination, or all, of these can be effective for your developer marketing strategy.

Four of these top sources are community-driven, indicating that developers prefer active, peer-produced knowledge consumption. So consider building marketing resources that: 1) are directed towards supporting open source repositories on sites such as GitHub, 2) maintain a presence on community websites and social media accounts, and/or 3) answer questions on public Q&A sites such as Stack Overflow.

This said, maintaining your website is still of utmost importance: of the vendor-driven information sources, official vendor websites are by far the most popular sources for developers. Here you have the direct ability to control the narrative on new releases, bug fixes, and advancements — and developers are listening. 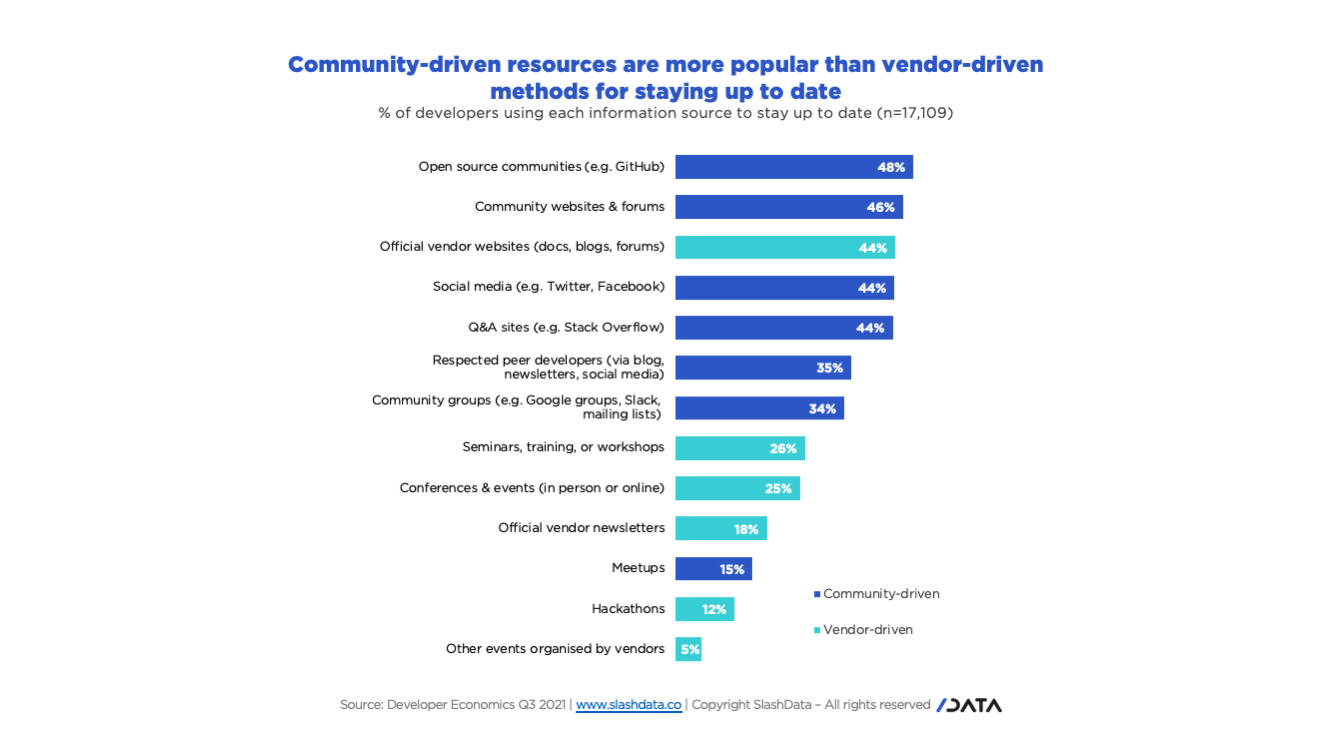 One size fits all?

As with most aspects of your developer marketing strategy, it’s important to highlight that not all developers are the same. Depending on the projects they are involved in, they have very different needs and habits when it comes to finding information and staying up to date.

A strategy targeting multiple channels simultaneously would be the most effective at reaching and retaining web, backend, and third-party app developers. These developers are also proportionally the most inclined to rely on official websites — so keep those websites up to date!

Developer engagement strategies using social media would work best for developers in web, mobile, game, and AR/VR development. Mobile developers are the heaviest users of social media, with nearly half of them relying on this source to stay up to date.

Keep in mind: social media has the advantage of being accessible and has the ability to convey information speedily, but its effectiveness is highly dependent on the profile of the developers you are targeting. As a general rule, the less experienced in software development a developer is, the more likely they are to be using social media as an information source. 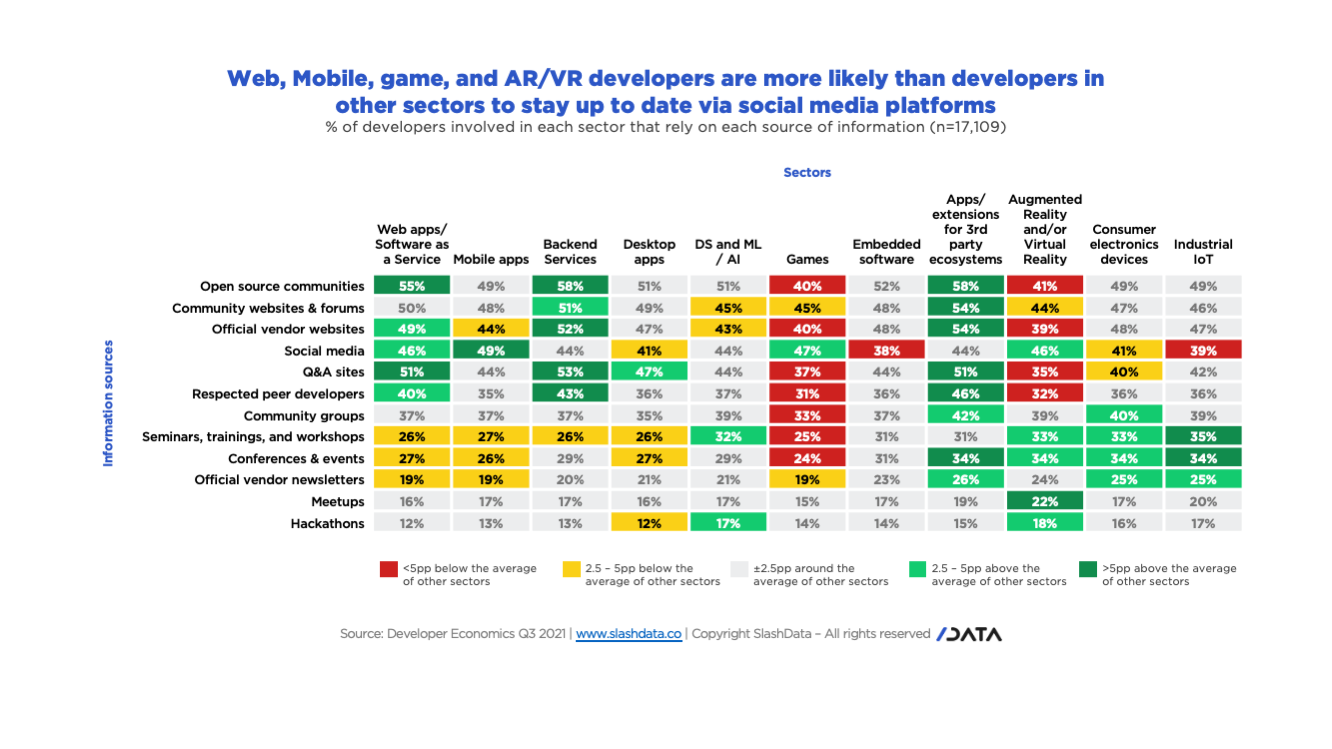 We round off this section by spotlighting the most popular source of information, open source communities. Open source has become such a ubiquitous part of developer culture — embodying the widely venerated values of sharing code, knowledge, and best practices among peer developers.

What would be the best way to leverage this channel? Developers share with us what resources they are looking to companies for. When we asked developers what support companies should offer, some of the most popular responses were:

Publishing publicly available resources and code in open source communities would increase engagement opportunities as a large portion of developers are familiar with leveraging this resource.

There you have it. We’ve walked you through which information channels could be the most effective in your marketing strategy to connect with developers.

To summarise, we discussed:

As you may have guessed this is just the tip of the iceberg of effectively communicating with your developer audience. For several years now, at SlashData we have been helping our clients to understand how and where to reach developers in specific sectors.

Interested in reaching game developers? Cloud developers? Web developers? With more than 10 years of experience in mapping the developer ecosystem through large-scale, bi-annual surveys we're here to help. Get in touch to find out more.

More from the libraryVisit Library