In this 3-part series, Doug walks us through a workshop that he’s delivered to hundreds of early-stage companies and their sales teams to help build predictable pipeline and repeatable closing processes that target your most profitable market segments, driving you towards an increased valuation and de-risked growth strategy.

Funnels: What You Can Learn from a Well-Defined One

Think about funnels in terms of the steps that it takes to progress something through. The graduations, the steps, the friction in between each step and how to remove that friction. If you put oil in a funnel, there’s viscosity, and there’s friction along the wall of any funnel. It’s the same in a sales funnel. There’s friction at every stage in the sales process but understanding what you want to accomplish in each stage and the conversion rates in each stage at scale help you understand where to spend time.

There’s a funnel that proceeds the sales funnel called the prospecting funnel. And this is key in helping you learn more quickly. But you’ll want to be careful about over-indexing on the definition of what the funnel looks like, if you can avoid that you’ll have a small number of metrics that are really important from a decision making perspective and understanding risk.

Stages in a Prospecting Funnel

If we have an organization with one or a couple or more people that are progressing leads or opportunities through a stage in a funnel and there’s a difference in perspective on what allows you to progress something through to a different stage, you can see how that can surface inconsistencies. It can surface confusion. It can surface lack of trust in the data and lack of trust in the pipeline. So it’s important to, from a trust perspective, from an alignment perspective, from a confidence in the probability of something progressing, to identify and define the stages.

How many stages? What are the stages, but also what can you verify from the customer or prospect at each stage? What actions are they going to take before you advance someone beyond that step?

A common mistake I see is, “I’ve sent them pricing.” Well, sending pricing doesn’t mean that they jettisoned themselves to a ‘proposal-presented’ stage. If they haven’t shared their business challenges, if they haven’t agreed that your solution can solve that challenge, if they haven’t identified who else in the organization is going to be evaluating or needs to be a part of the evaluation process, sending pricing is simply done either because you sent it prematurely or because they asked.

Try to capture the few steps prior to doing a full discovery, but be careful not to over index. Prior to building a full understanding of what their business pains are and presenting the solution that you have, there are things that you’re going to want to accomplish in advance.

Maybe you introduce a shorter call that you have with them prior to doing a full discovery. Then what’s the agenda you want to set with them as to what’s being accomplished? Maybe you move them to another stage if they simply agree to a 10-15 minute call with you. After that, let’s assume that that you’ve had that call, what do you want to accomplish on that first call, where you then schedule 30-40 minutes of time with someone to do full discovery? What do you want to accomplish from that prospect?

Their Role and Relevance

Market Segmentation: A Strategy Based on Sales Velocity

The importance of market segmentation from the perspective of probable sales velocity, meaning the probable rate at which you can generate pipeline for how much time it takes you to do that is important because it’s going to give you some clarity, some focus on the market segments you’re addressing with confidence that you’ve sequenced them in a way that you’re going to get the most out of your time. And when we talk about messaging and messaging strategies, you’re going to be able to align your messaging a little bit more with that particular market segment.

There’s a very simple formula that’ll guide and generate a prospecting calendar for you. Every four weeks, you’ll be testing a new market segment. You’ll get the derivative of pipeline that you’re creating, but you’ll also get the derivative of learning which market segments are responding at a higher rate. Then you’ll be able to communicate either internally or externally the rate at which you’re able to learn and how you’re running tests and experiments. 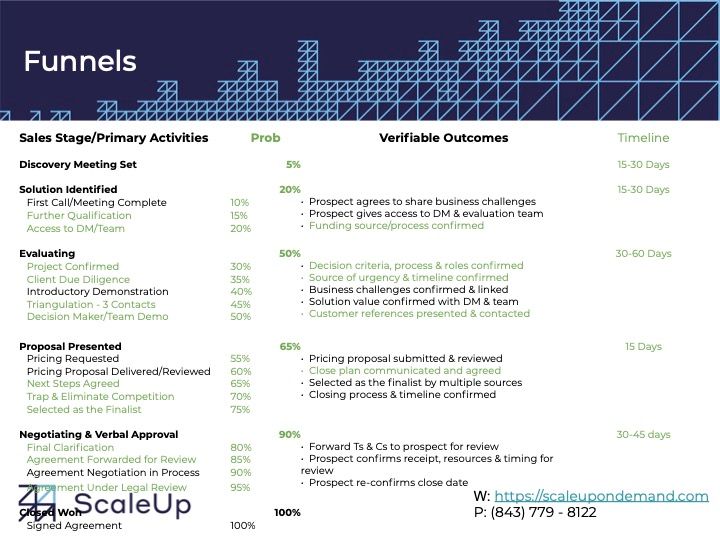 Prospecting Velocity is (Average Deal Size)x(# of Prospects)x(Conversion Rate) divided by (# of Days to Complete Prospecting).

These are all things that you can capture inside of the prospecting funnel that proceeds the sales funnel. Getting through a sales funnel could take 3 to 9 months but if you have a prospecting funnel, it’ll only take 30 to 45 days for you to capture all of this data, which allows you to learn a lot more quickly.

It’s different from a Customer Acquisition Cost (CAC), which is a measure of how much it costs for the number of clients you end up generating, because a CAC is dependent on making a sale so you’re dependent on the length of the sales cycle, which can be a year and a half. But prospecting velocity can provide confidence and directional guidance a lot sooner.

When you create segments, it can give you a better understanding of how to sequence them to fill out your campaign calendar, help align your messaging, inform your product roadmap, and more.

Ready for more? In part 2, Doug walks us through metrics to track and be mindful of, and the tools in his recommended sales stack.